Are you in awe of Monument Valley—the iconic symbol of American southwest? Wondering if there are similar eye-popping places nearby? Look no further; here’s a list of must-see attractions near Monument Valley.

All the below attractions are less than 1.5 hour driving distance from Monument Valley. So, you can make the Valley your base to explore these lesser known gems.

Have you seen the movie Forrest Gump? Do you remember the scene where Forrest stops running? That’s highway 163. And that particular area is just a 20 minute drive from Monument Valley visitor center.

Forrest Gump point, that’s what it’s usually called, is quite a popular stop and you will see why. From Forrest Gump point the highway goes straight as far as the eye can see before it turns right into Monument Valley. This view is impressive and a great photo-op. There are many pull-outs on this highway where you can get that classic shot.

Since there will be many enthusiastic photographers, be patient and wait for your turn, look for traffic in both directions, and click away.

If you love the world-famous Horseshoe bend, then you will definitely love Goosenecks. Goosenecks are two adjacent bends in the San Juan river. These bends are officially called the entrenched meanders. These meanders have been impressively sculpted by natural forces, and in my opinion, are more imposing than Horseshoe bend. Also, since Goosenecks state park is off the beaten track, it is easy to get as many pictures as you wish without any other human in your frame.

Goosenecks state park has a primitive campground, picnic areas, and vault toilets. There is no food or drinking water available in the park.

There are no maintained hiking trails in this state park. However, an un-signed trail called Honaker trail leads all the way down (2.5 miles) to San Juan river.

When we visited Goosenecks state park wind speed was around 45miles/hr, because of which we could barely explore the area.

Moki dugway is the dirt switchback road on Cedar Mesa and is part of the State Route 261. As the name dugway suggests this road is excavated into the cliffs of Cedar Mesa.

From National park service site – “The State of Utah recommends that only vehicles less than 28 feet and 10,000 pounds attempt to negotiate this route.”

As you ascend the dugway and from the first viewpoint you see the Valley of Gods below you and the vast expanse of desert beyond.

Muley point is one of the most spectacular viewpoints (in my humble opinion) the USA has to offer. A few may argue that the view is similar to some of the vista points in Grand Canyon. But what you don’t realize is that this place is remote, rugged, and you won’t see any human development as far as the eye can see. You will be overlooking the Goosenecks with Monument Valley in the distance. We felt like we were on Mars!

To reach Muley point continue on the dugway and take the first road to the left. Drive 5 miles on this dirt road to reach this breathtaking outlook.

I wouldn’t add the below two attractions in the ‘must-visit list’, but depending on your time and interest they might be worthwhile to stop by.

Mexican Hat is a small village that gets its name from the red rock formation resembling a sombrero or a Mexican Hat. This village is on Highway 163 next to the San Juan river, and the Mexican Hat Rock is just a few miles north of the village.

Mexican Hat has less than a handful of motels and restaurants. You can make this village your base if you plan to raft or kayak San Juan river or explore the above three attractions.

We drove through the village, had lunch at one of the restaurants, saw the Mexican Hat Rock, and continued towards Cedar Mesa. But guess what, we missed clicking any picture.

Valley of Gods state park has sandstone formations similar to Monument Valley, but in smaller scale. You can tour the valley via a 17-mile dirt road. This road can be impassable in the rainy season; so check the weather and road conditions before touring the valley.
The prominent buttes in the valley have names like Rudolph and Santa Claus, Setting Hen butte, Rooster butte, De Gaulle and his troops, and Lady in the bathtub.

This state park is managed by the Bureau of Land Management (BLM). However, there’s no entrance fee and no service.

We didn’t tour Valley of Gods, just drove by it on State Route 261 before ascending Cedar Mesa.

Now, if you are game for a short road-trip of 2hrs from Monument Valley or Grand Canyon (Tusayan), I have an amazing off-beat canyon for you: Coal-mine canyon.

Coal mine canyon is part of Navajo Nation and is in northeast Arizona, about 16 miles south of Tuba City. From Tuba City drive southeast on Highway 264. After milepost 337 keep an eye out to your left to spot a small windmill and a water-tank. You will see a couple of dirt roads leading in that direction. Pick one of the dirt roads and drive in the direction of the windmill. After passing the windmill you will see a couple of concrete picnic tables, beyond that is Coal mine canyon.

The concrete tables are part of the primitive campground at Coal mine canyon. There’s no water and washroom facilities. For camping here you have to get a permit from Navajo Nation.

Coal mine canyon has no established trails, but you will see some bootleg trails going down into the canyon. From whatever I have read online, you need a guide and/or a permit to hike down into the canyon. It is best to check at Cameroon Trading post on Highway 89 or the front desk at Moenkopi Inn Legacy suites at the intersection of Highway 264 and 160. We didn’t descend into the canyon, only explored around the rim. As you walk around you will see lines of coal along the canyon wall. Be very careful while walking around the rim as some areas are fragile and can easily collapse.

To see more pictures hover on the picture below and click on the arrow. 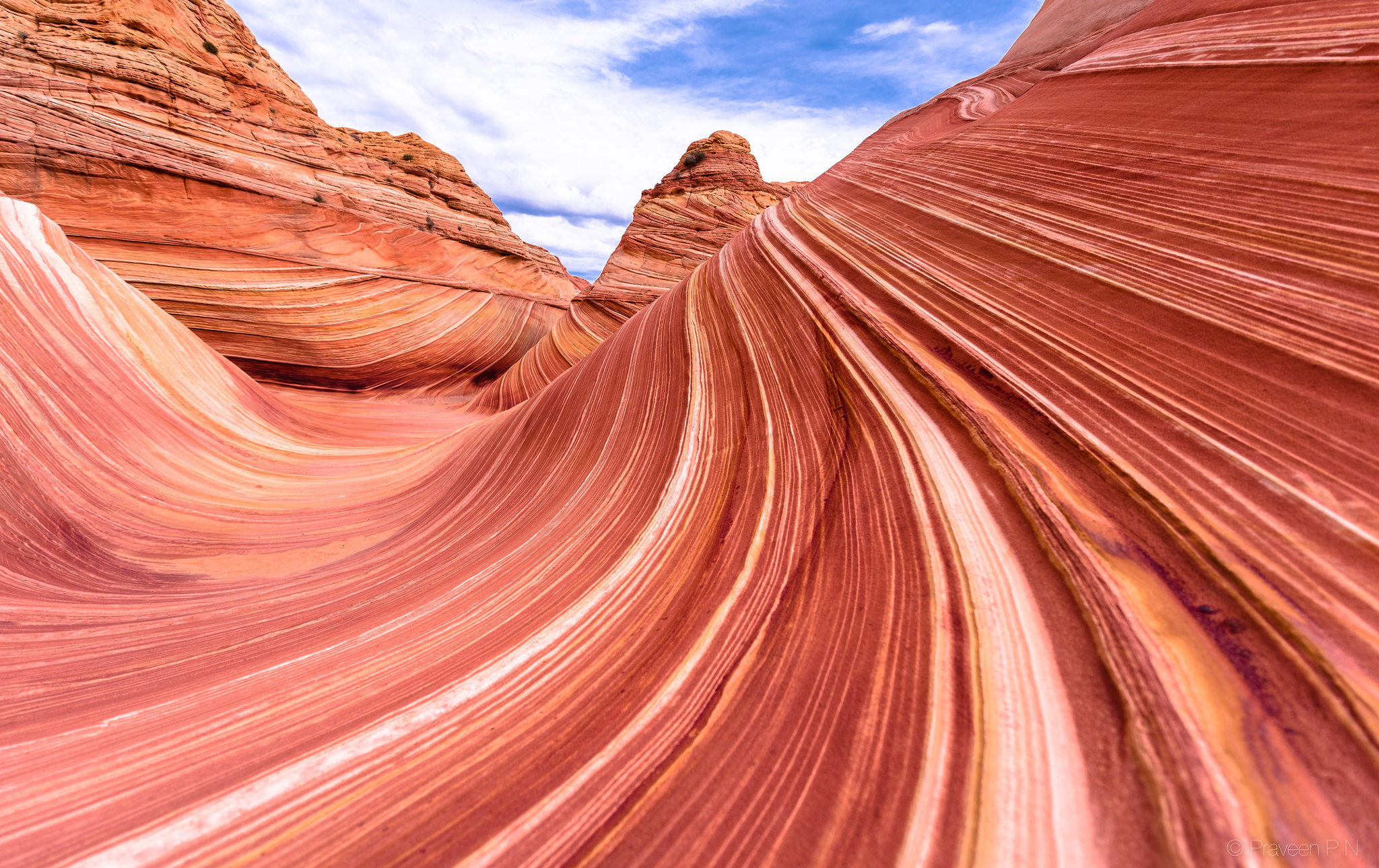 Intrigued by deserts and their bizarre formations? Click here to explore similar peculiar places in Arizona and Utah.