Czech Republic’s capital city Prague or Praha (in Czech) is on every traveller’s ‘must-visit’ or ‘bucket-list’, and it is easy to see why. With spires dotting its skyline, swan ruled Vltava river, and the 9th century Prague castle overlooking the city from a hill, Prague can be mistaken to be a kingdom right out of a fairytale. No wonder this city is nicknamed ‘City of Hundred Spires’.

Being a budget-friendly city, travelers are constantly ‘ticking-off’ Prague from their bucket-list. No marks for guessing how touristy Prague can get. It is unlikely that you’ll find the Old town square or the famous Charles bridge all to yourself. So, here’s something for you, offbeat Prague: top 4 suggestions.

This tour might not be everybody’s cup of tea, but it sure does give you an insight into Czech Republic’s communist regime, the StB (Czech intelligence agency), and the Velvet revolution; all this while you stroll in the old city with your tour guide.
The highlight of this tour is a visit to the communist museum and nuclear bunker in Žižkov district (Prague 3). Yes, a nuclear bunker from the 1950s! It can accommodate close to 5000 people, can fully function within 20 minutes in case of an emergency, has a working air-purifier, has a decontamination room—all 16 meters underground. You cannot independently visit the nuclear bunker; the only way to see it is an organized tour.

The whole tour lasts for approximately three hours, and it costs 600CZK.

Rendezvous with the swans of Vltava

Prague’s famous river Vlatva is ruled by snow-white swans. These beauties gather around the shores and look out for food from humans.
In the Lesser town, Malá strana, close to the Franz Kafka museum, you can watch a bevy of swans chilling, flaring their wings, or even on a strife with a Nutria (water-rat).
Malá strana is a great place to spend some time away from the crowds, admiring the city’s beauty.

There is no dearth of statues and sculptures in Prague; Charles bridge itself has 30 statues mounted to the balustrade. Besides these, the city has a number of strange statues, many by the country’s famous sculptor David Cerny.
Take a walk across the city and see how many statues you find. Few of them are listed below. We went looking for some of these and others we stumbled upon.

Beer being the most popular drink in Prague, Prague has a number of beer gardens. Letná beer garden in Letenské Sady or Letná park in Prague 7 is the only one we visited. This beer garden is built on Letná hill and has stellar views of the city and Vltava river. There are bike paths, a skatepark, many playgrounds, the Metronome (in place of the Stalin monument), a restaurant, and panoramic views of the city. The only let-down being beer (and wine) is served in plastic glasses, and food is limited to sausages and grilled cheese.

Letna park is famous among locals as well as tourists alike and gets crowded in summer. In October, however, there were fewer people in the park with many empty picnic tables around.
I would suggest to pack some food and head out to Letná park in the evening to watch the sun go down.

The other famous beer garden (we haven’t been here) is Riegrovy Sady beer garden located in Riegrovy park in Prague 2.

Other tours and activities of interest

Prague food tour – EatingPraguetours. We did a food tour with these guys in Rome, and we were highly satisfied. I’m guessing they have a great tour in Prague too. 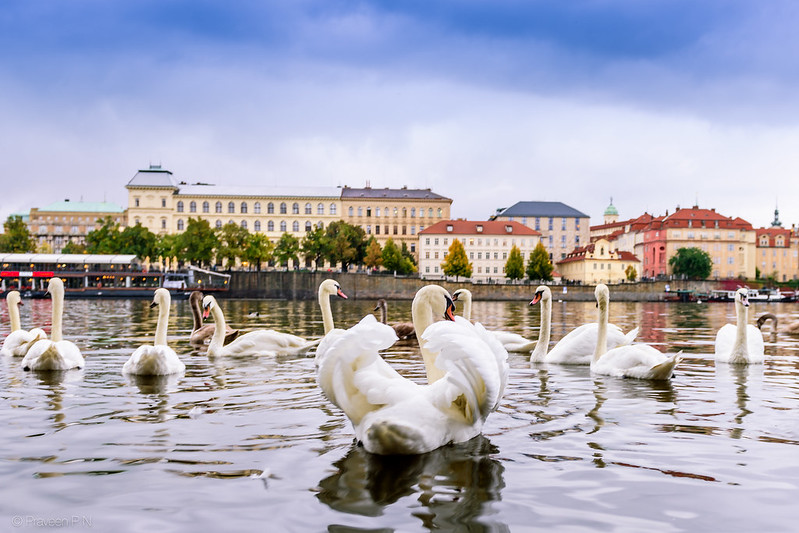 (We visited Prague in October for 4 days)

Now for the giveaway…   (This giveaway is closed)

In collaboration with GPSmyCity I’m hosting a giveaway of a FREE city guide for Prague (Czech Republic).

What is GPSmyCity? GPSmyCity provides walking guides (for both iOS and Android) for over 470+ cities worldwide along with city maps and articles.  To know more about them click here.

I’ll be giving away 20 promo codes for a free (worth $4.99) download of the city guide for Prague. Here’s how you enter the contest:

Comment on this post and tell me your favorite place in Prague.
If you haven’t been to Prague, tell me which European cities you are planning to visit in the near future.
Also, mention if you require the promo code for iOS or Android.